It’s very easy to miss things that have been right under your nose for some time – I had cause to consider this point on more than one occasion over the Christmas season when, after eating a mince pie or two, I would catch a glimpse of myself in a mirror to find a dusting of icing sugar on my beard.

In that spirit, it occurred to me it would be interesting to uncover some of the historic and interesting things we walk past in Ipswich regularly but that go unnoticed – usually because it involves raising our gaze above shopfronts or because they are slightly hidden away. So, here follows some things worth looking up for:

Note: some of these finds I have come across myself over the past few years, but much additional information comes from Borin Van Loon’s Ipswich Historic Lettering website, which is an encyclopaedic record of historic signs and lettering in the town that continues to be regularly updated. If you would like to explore this topic further on his website please click here

A Tudor Doorway and Beam

Hanging upon the brick wall facing the back of St. Stephen’s Church (now the Tourist Information Centre) is the last known wooden beam from the Tudor house of Thomas Rush, which once stood not far away in Brook Street. Rush represented Ipswich in the parliaments of 1523 and 1529 and was appointed Attorney in the building of Cardinal Wolsey’s ill-fated Ipswich College. Click here for more information on Wolsey’s College. The beam itself, which I must have walked past routinely for years without noticing, is intricately carved with mythical beasts, as well as with Rush’s merchant’s mark and his initial ‘R’.

Nearby on the south side of the church one of the buttresses, on closer inspection, actually contains a blocked up doorway. It seems Rush paid for a chapel to be built on the south side of the nave dedicated to him, for which this side door was the entrance. All that remains showing his connection to the former doorway now is his initial ‘T’ on one side of the buttress (presumably the ‘R’ on the other side has worn away over time).

South Wall and a buttress

Left-hand side of buttress

Faces Under the Eaves

Have you ever walked along Eagle Street and noticed this strange plaster face staring down at you? Me neither, until I read about it in Susan Gardiner’s book Secret Ipswich and went to have a look for myself. Gardiner explains that it is very hard to say how old the face is but that it probably dates to the 1800s and that the face “has led to all kinds of strange tales, including a story about the house having been lived in by an ogre.”

On a similar note, I came across this strange face under the eaves of the Edinburgh Woollen Mill On the Buttermarket a couple of years ago, but haven’t managed to find any more information about it since then.

This carved face can be found under the eaves of the Edinburgh Woollen Mill, its location is indicated here by a red circle.

On the side of Pickwicks Coffee and Tea House in Dial Lane you can see an interesting example of a ‘ghostsign’ (an old shop sign painted onto brickwork that remains even though the building it is painted on has been re-purposed). This sign was hidden under newer layers of paint but was rediscovered in 2013 by a decorator working on the outside of the building. The sign, which is painted in a style that creates an optical illusion making it appear to be chiselled into the wall, reads “Spectacle Specialist Optician By Appointment to East Suffolk and Ipswich Hospital” You can read more about this discovery in a BBC news article here

It’s also worth noting the unusual iron gates by the entrance to Pickwicks as they clearly point to the building’s past as an opticians, depicting as they do, a pair of spectacles.

Ghostsign on the side of Pickwicks 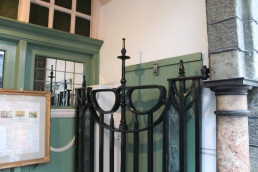 Some more ghostsigns are to be found above the frontage of Car Phone Warehouse on Tavern Street, which appears to have been a hairdressers that expanded into an emporium of sorts run by the Wootton family. The remaining painted signs above the current shop facade list the services and wares once on sale at Wottons including: “LEATHER GOODS, STATIONERY, TOYS & GAMES, FANCY CHINA, HOT BATHS, FANCY COMBS, ‘PERMANENT WAVING’ and FACE MASSAGE.” To see a full transcribed list of all the text, visit Borin Van Loon’s excellent Ipswich Historic Lettering website here

Here’s an unusual looking sign that features upon a wall on Upper Brook Street above a charity shop. This symbol comprising of three wings within a wheel and the initials ‘C T C’ is actually that of the Cyclists’ Touring Club, a forerunner of the modern-day Cycling UK. This sign was a seal of approval that these premises, once the Coach and Horses Inn, provided good accommodation and service to cyclists. According to the Ipswich Historic Lettering website it is thought that it was placed on this building “in about 1887”. To find out more click here

Police at the Town Hall

Above this side entrance to the town hall on Corn Hill the words ‘POLICE STATION’ can just be made out above the Roman numerals MDCCCLXVII (1867), being the year the current town hall was constructed. The town hall went on to host a police station for just over a century until 1968.

Although fairly innocuous, this doorway actually appeared in a cartoon drawn by the well-known cartoonist Carl Giles, which can be viewed on Borin Van Loon’s Ipswich Historic Lettering website here

This sign, which probably dates to the early 1900s, was an advertisement for J.A. Symonds’ chemist’s shop that once occupied this building on Upper Brook Street. The American George Eastman introduced film rolls in 1883, this soon paved the way for his Kodak camera which brought photography to the wider public instead of just the privileged few who had previously owned plate cameras. Symonds was obviously a seller of this new equipment in Ipswich. I’m not quite sure how successful the sign itself was in advertising this, as I must admit I hadn’t really noticed it in over quarter of a century living in Ipswich until a few months ago, but then, maybe that says more about me than the sign. 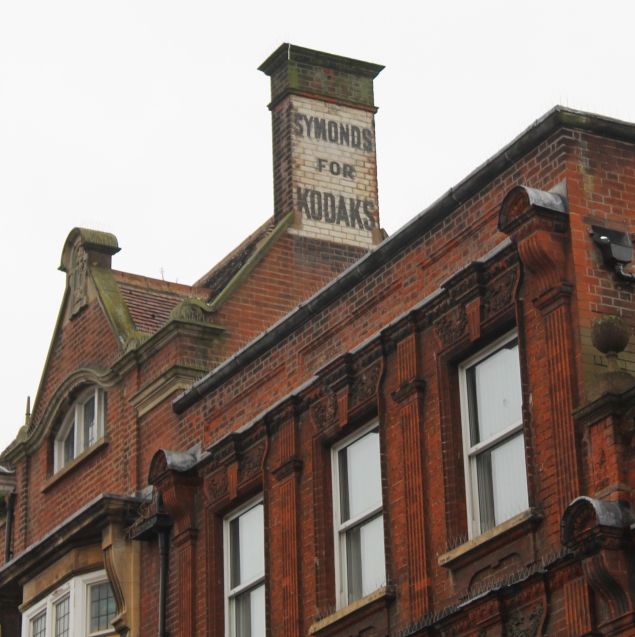